Brexit
Dear customers in the UK, please note: Due to the new tax regulations in the UK after brexit the minimum order price for orders to the UK is 150€. If you want to understand why, please follow this link. All orders above 150€ are shipped without German VAT, so the price marked as "netto" is the relevant price for UK orders.
Orders to Northern Ireland are not affected, please use Northern Ireland as your country at checkout. Do not use UK!
HomeBodhransMONss

From concept to creation

The MON ‘Signature Series’ Bodhrán is the result of a 5 year collaboration with bodhrán maker Christian Hedwitschak. I first met Christian in Edinburgh in 2007, at a workshop where I was teaching and he was displaying his bodhráns. We started chatting about drums. He was curious to know why I was playing such a small drum at the time (12” bodhrán). So I explained about the sound I’m looking for and the advantages harmonically of the smaller drum. After exchanging a few emails, he sent me a 12” LLD (LightLine Deep) to try out with one of his DRAGONSkin’s as an experiment. I instantly took to it. The sound was much more mellow than I was used to, but it had a lovely warm tone. Since then I’ve played many of Christian’s drums and they’ve never let me down. For a while I played the 13″ ‘MOF’ model in various guises –  TwinSkin, DRAGONSkin (Classic and Spicy), with and without concave frame, and later, with the introduced compressor tuning system.
I’ve worked with Christian giving feedback on the different drums and carried out studio tests comparing the different sounds. Most importantly for me is the ‘road test’, putting the drums through their paces night after night on tour.

When it came to designing this signature line, I knew exactly what I was looking for in one drum particularly after having had the opportunity to test out and give feedback on all of these drums.But achieving what I wanted was no small feat. I wanted a drum that sounded completely balanced across the frequency range and responsive whether tuned low or high. As my playing is a hybrid of ‘bottom end’ and ‘top end’ style, I wanted something that was a ‘one stop shop’. It’s important to have a drum that can respond musically to whatever is required, especially for studio work. Over the last 20 years or so, I’ve played all different sizes of bodhráns but in the past few years I seem to be most comfortable on the smaller frame. My style of playing lends itself towards having a clear tone and few harmonics. The tape around the rim, which has been popular with drum makers for several years now, helps control unwanted overtones/harmonics. However, to my ears, with the smaller frame you get much more of the fundamental frequency and it is very precise. This is extremely useful when playing bass lines etc. but also in an ensemble setting where it takes up less of the spectrum. However, I realised that I wanted this drum to be slightly bigger than the one I had been using. This is because of my posture when playing. My approach has always been about being as relaxed as possible when playing, though I’ve found with the 12” & 13″ drums I tend to be more hunched over the drum. This is something that concerned me a lot, as I was becoming aware of the stresses on my back and shoulders. So here was the next challenge. Increase the diameter without losing any of the benefits of the smaller shell. After discussing it with Christian, we decided to move to 35cm (14”), and for the depth to remain at 15cm (6”) and we’d use the ‘DRAGONSkinSpicy’ to achieve the sound I was looking for. The skins chosen for this drum reflect my own playing preference. I apply a lot of pressure to the skin when playing and therefore turn the drum constantly to prevent excessive wear on one area and to keep the tuning even. For this reason, I prefer the skin to be consistent all over and without the thicker part from the spine/backbone that can be quite common on bodhráns.

I also wanted this to be lightweight and comfortable to play. We decided to go with a concave frame and use the new compressor tuning system. The concave frame not only helps stabilize the drum, it keeps it light. It also greatly enhances the aesthetic of the drum, which is no bad thing. With the black nylon ribbon around the frame I get the right amount of friction whilst still able to turn the drum whilst playing. The compressor tuning system recently developed by Christian and Rolf Wagels, with support from Jim Higgins, helps to achieve a balanced frequency response in the lower register and is especially useful both in the studio and on stage. Furthermore, it provides the clarity and definition I always associated with the smaller frame on a larger drum. It also makes for a more comfortable playing experience and with the angle of the rim you can bend notes with ease.  In 2018 we added the IsolatHED technology which provides an even more precise tone.

When deciding on the finished look of this bodhrán, I wanted something that was understated and also reflected my own personality. We settled on a sunburst finish, from grey to black, which really draws you in to the concave shape of the frame. Rather than continuing this finish to the inside, we felt that the natural beech interior complemented this and worked well together. 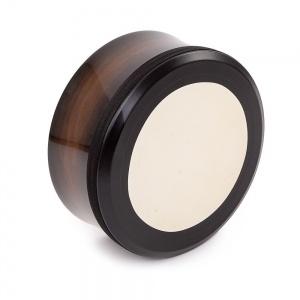